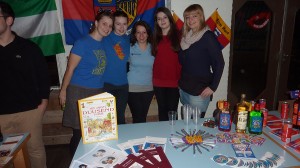 This year the westfrisian minority FYK invited us to the easterseminar to Grou. The Rökefloose drove to westfriesland with Jenny Jürgensen, Berit Nommensen, Marlene Christiansen, Sieke Peters and the newbie Svenja Schüle.

The theme of the seminar was Connext!, to wich there were offered four workshops. In the programme offered something for everbody. On sunday we went to a church, where the sermon was in English, German and Westfrisian. Later that day we were inviteted on a boattrip through the channels around Grou and in addition there were a lot of possibilities to debate and discuss about minorities. To get to know each other, there was minority speed dating and indoor sport on the programme.

On an excursion we went to Leeuwarden, where we could live out our creativity and take a lot of crazy pictures at a citygame. One of the highlights was of course the exchange market, where „Schüttelköm“ and „Teepunsch“ were very popular.

At the annual generel assembly Jenny Jürgensen retired as the vice president, but we are very happy, that Berit Nommensen was elected as the convenor for the workinggroup enlargement with just one blank vote. We would like to thank Jenny for her effort, she made in the JEV and wish Berit good luck for the next two years in the board.

This was Svenja Schüles first YEN seminar and she liked it very much, so we hope, that Svenja will remain faithful to the Rökefloose.