Spiders and other earthlings in Bautzen 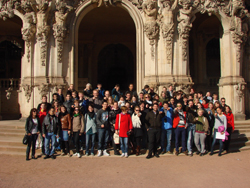 Under the direction of the Sorbian spider gang („Pawk“ in English spider) this years Youth Leader Seminar 2011 was organized in Bautzen. The hosts have stoped at no trouble to provide a diverse program and to give everybody of the approx. 70 participants with different cultural backgrounds an extraordinary experience. To get a feeling of the location the seminar started with a city tour, where everybody had the possibility to experience the 138 steps in one of the many towers in Bautzen. Amongst others the most important Sorbian institutions, such as the house of the Sorbs and the Sorbian museum, were visited.

Obviously RML2future was present as well – so questions about minority languages were asked at a stand that managed to confuse some of the most renown minority experts. Besides the Sorbian play “Marathon”, which was performed in the German-Sorbian theatre, one of the highlights was the Sorbian music festival. On the stage was Sorbian Hip-Hop, Rap and DJ’s that provided a great experience.

One day the participants joined for a trip to Dresden. With the bus the most important sights of the city were visited, amongst others the rebuild Frauenkirche. On other days the members of the working groups of YEN worked on their projects, whilst the other participants had the change to participate in a graffiti workshop, in which everybody could express his creativity with a sprayer.

The traditional exchange market performed a Sorbian dance, which later was practiced with the participants. Luckily nobody got injured and the Council of Members could as planned take place the next day. The verdict: Besides the fact that the police had to control the loud smokers outside, the autumn seminar was a great success. Thanks to the spider gang for the incredible week.