Singing for Amateurs – Voices of Europe 2011 in Fryslân 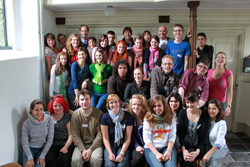 This years Voices of Europe took place between 29 sheep, 2 horses and a breeze of fresh countryside air in Engelum/Ingelum in Fryslân. For one week the 30 motivated participants went in single file to the church of Ingelum early in the morning. The choir practiced daily in the church. In a few days the choir group had to learn several songs. The idea was that every participating minority would bring a song in their language from their home region. The biggest challenge was to proper pronounce the Kashubian song from Poland called „Drëszë wprzódk púdzemë wbiôtk“. The Northfrisians were represented with the song called “Dåt dü man liifste bast”.

The conductor Peter Shannon made the three concerts to a good success, as he got the best out of the amateur choir, since more than 300 guests came to the concerts.
However, the program did not only contain singing. The organising team from FYK provided lots of typical and local activities: Keatsen (a ball game), Fierljeppen (a leaping game) and when eggs were thrown, everybody had the chance to taste a raw egg. Unforgettable was the adventurous sailing trip, where some participants had to struggle with some slips.
All together a very diverse week that mainly challenged the vocal chords.

Thanks to all the participants: Sorbs, Kashubs, Danes from Germany, Aromuns, Vlach and Slovenes that sang along. And off course the choir conductor, a native Irishman, Peter Shannon, who kept up the good spirit. A big thanks to the organizing team FYK, who provided a nice week for everybody.