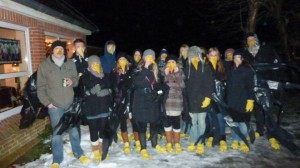 To close the old year and to proper celebrate the upcoming new year, the idea came up to organize a border-crossing event together with the Germans from Denmark and the Danes from Germany.
The provided food was served in the form of a Raclette and to kick of with a good start, small party games were distributed among the guests. Naturally, a typical Frisian new years eve party would need the traditional friction drum running through the village. Quickly the guests transformed themselves into a group of crows (Rökefloose) with self-made beaks and feet. The disguises were very popular in the village, but couldn’t cope for long in the cold December weather.
At midnight the new year was celebrated with champagne and fireworks. Later that night the guests could experience a sensation. Suddenly one of the guests went missing. The police was alarmed and the guests started to get agitated. Luckily the person appeared again after an hour, and it turned out that she just took a little nap in the car.

All in all it was a happy and cultural diverse party