„Minorities in Europe – between European participation and preservation of ethnic identity“ 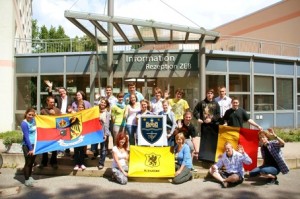 In Hanover this summer, a new minority project was started, which originates from the majority. The seminar, which took place in Stephansstift, the Center for Adult Education, will serve as a prelude for a network that connects not only the minorities themselves, but also the minorities with the majority.
At the seminar not only Frisians, but also Kashubians from Poland, Germans from Hungary and the German minority in Belgium were represented.
The seminar begun with presentations by the minority groups and discussions about how to define a minority and hereafter was the EU a topic. Of course a panel discussion with politicians about minority politics wasn’t missing (unfortunately only with representatives of Grüne and SPD).
Also leisure was part of the program, Hanover was explored and the group was received at the City Hall by the Deputy Mayor. A trip to Berlin was as well a part of the program; this included a city tour, a visit to the Berlin Senate for Integration and Migration and a visit to the cultural community of the Sorbs (Kulturgemeinschaft der Sorben).
The last days were marked by a fictitious business game (minorities in Fontanien) here could the participants apply what they had learned in the last week and could active get to know minority policy.

The first ideas for the future of the project have emerged and we look forward to seeing how it will develop.