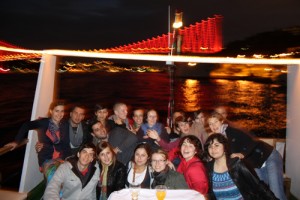 In between Europe and Asia lies the capital of culture 2010: Istanbul. Chaotic and without any plan millions of people are trying to thread their way through the city. In the middle of everything a little North Frisian tries to settle in. Without any perceptible success. Ah… there comes a helpful German Turk and orders two cups of tea for us. Sometimes it seems like the Turks are drinking more tea than the East Frisians, though this claim is open to question. Anyhow… The tea has to be finished because we have a very full programme.

The exchange with acknowledged German minorities and social and religious minorities was supported by the ministry of foreign affairs in Berlin and organized by the civil association. I flew with 11 other young people from Berlin, whereas the other half flew from Frankfurt to Istanbul.

Some of the things which were on the programme were; the institute of Goethe, the German consulate-general, the Greek Orthodox Church, the Jewish district, the Alevis and the Armenian newspaper “AGOS”. Our tour group was very mixed. Among the acknowledged minorities in Germany also unofficial minorities were present as for example the German Turks, homosexuals and Jews. The goal was that young German people who are part of a minority get into contact with Turkish minorities and in that way not only establish contact in Turkey, but also Germany.

I short: A very impressive week with both inspirations from outside but also from the dialogue in the groups. By the way, the federal president Wulff was also in Turkey the same week. Loaded Turkish tea, Raki and overwhelming impressions I leave the 12 million metropole – of course without headscarf. The hospitable Turkish say goodbye the Turkish way: Goodbye, kiss here and there, ‚Yakında görüşmek üzere’ Istanbul !